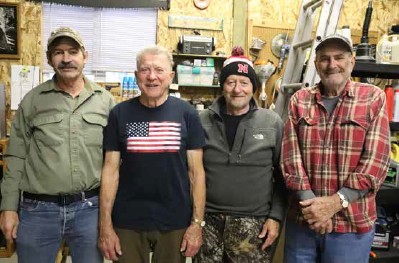 Don Kaufman has been hunting up in the area around Gillette Lake since 1967, and while he is from Tacoma there are family attachments that go back over 100 years to the Pend Oreille Lakes area. His current hunting partners Casey Wintler, Terry Buol, and Joe Kheieel have been coming for most of that time as well, and the group got together to share memories of the hunts. “It started in 1967, hunting season started later, just before Thanksgiving and ran until early December, said Don Kaufman, “It was always cold and there were a lot of deer, things have changed over the years it’s definitely warmer and there is less deer around. My great grandfather homesteaded on the far side of Thomas Lake in 1906 and my mom and dad were born in Colville in 1920. We didn’t start hunting here until 1967 though. It became a tradition though, I haven’t missed a season since starting in 1967, he (Kheieel) has only missed one season and these other guys ( Wintler, Buol) have been coming for a number of years too.” The homestead cabin was used until it passed out of the family, and another cousin’s place was used until a new family member didn’t want the group out for hunting anymore. The group is currently staying with Gillette Lake resident Roz Minch who enjoys having the group in her shop, “These are the best guys I’ve ever met in my life.” Back in the day the group would hike up the hill in the morning, come back for lunch and then hike back up in the evening. “Not anymore,” said Kaufman, “We get to run up the hills in machines, if it wasn’t for them, I probably wouldn’t be doing it anymore.” The group hasn’t faced too many dangerous situations, “We knew the area, if we got turned around we knew to head West to find the lake or the road,” said Kaufman. Not too long- ago Joe Kheieel came face to face with a cougar on the hill near Lake Gillette, “I was going uphill in a side by side and all of a sudden there he was on the upper bank, we looked at each other wondering what the other was going to do when he took off down the hill and disappeared.” Casey Wintler mentioned that hearing a group of wolves over a kill near your tree stand or finding out that a cougar was in your tracks as you were heading out will raise the hair on the back of your neck. Off times were pretty basic at the homestead cabin and wherever they stayed, mostly preparing food, beds, pranks, and playing a great many card games. The hunting trips are a multigenerational event now, as Don’s father started it, and now both children and grandchildren are now joining them. Even as Don approaches 81 years old he looks forward to coming out every year, “We’ve had a lot of good times out here, we’ve taken some nice bucks off that hill over the years.”