By Brandon Hansen / For The Statesman 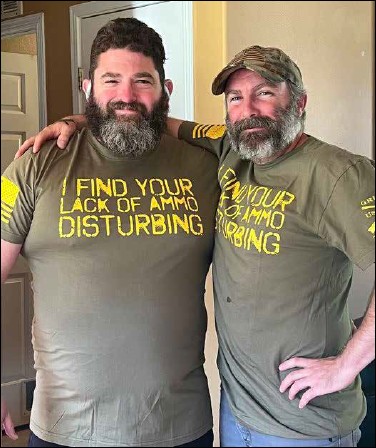 A conversation ten years ago between friends Sean Reagan and Devin Tope turned into a Metaline Falls business: Pend Oreille Ballistics. “We were deployed together,” Reagan explained. “He was with the Navy and I was with the Coast Guard. Ultimately this is Devin’s retirement plan. He retired from the Navy in July as a Gunner’s Mate First Class and he has had a passion for all things related to firearms, especially making ammunition. Naturally, an ammunition plant, gun smithy and gun store seemed like a logical next step in life.” Pend Oreille Ballistics has a Type 7 Federal Firearms License and Washington State Firearms Dealer License. This allows the company to manufacture firearms and ammunition as well as sell firearms in a retail store. “We can sell anything a gun store would sell as well as make ammunition,” Reagan said. Pend Oreille Ballistics is an ammunition manufacturer with three areas of focus: large bulk packages of service caliber training ammunition, common popular hunting calibers and defensive ammunition. This includes common specialty ammunition, and boutique hard to find calibers made to order. They also do gunsmithing operations to fix, maintain, modify, blu and paint firearms and mount optics. They also sell these guns, optics, lights and a variety of gear to the shooting community as well. To make ammunition, the company needs presses, dies and components. The round consists of primer, powder, casing and tip or bullet. “Pend Oreille Ballistics has the dies to make about 50 different calibers so far, six multi stages presses for bulk production, four single stage presses for precision loads and one 50BMG press,” Reagan said. “At full production we can make about 10,000 rounds an hour.” Devin Tope is the Operations Manager and oversees the ammunition technicians in their daily tasks. “Devin lays out what is going to be made that day and then sets everyone to task,” Reagan said. “Normally the Tech sees a tasking from case prep to packaged product and depending on the number of rounds being made that tasking can take several days. One of our techs pushed out something like 2,500 of 45 230gr ACP over the course of two and a half days running flat out.” Reagan noted there is quality control in every process along the way and it’s a time- taxing part of the process. These checks include a visual check of the casing, reverification of the powder load throughout the manufacturing process, cartridge length checks and overall case length checks. Each piece of ammo also goes through the chamber gauge. Pend Oreille Ballistics has sixteen different types of ammunition. The company has eight rifle calibers, including 5.56 and .308, and the other eight are pistol calibers. Their pistol calibers include training ammo with full metal jacks or total metal jackets. They have also started making defensive ammunition in 38SPL+ P. The most popular round so far has been 9mm. “The feedback has been phenomenal,” Reagan said. “We’ve gotten ‘ housewarming’ gifts and a ton of donated components from local family treasure troves. Our pricing seems to be right on as we get a lot of positive comments in that regard. Also, we get to see a lot of cool family heirloom firearms as Dev is known to be an excellent gunsmith. Folks like to come by and show and tell and have Dev take a look at their firearm. He ends up giving it a good cleaning and function check and in the process all the staff gets to ooh and ahh and get up close with guns you’d normally only see in books or museums. Fun times at the ammo plant.” Pend Oreille Ballistics will begin shipping through FedEx this week and will be a drop off point for the local community at their facility at 301 Lehigh Ave. in Metaline Falls as well. People can shoot POB an email at npocllcwa@gmail.com or find them on Facebook https://www.facebook.com/NPOCLLC/ The politics of the time and several laws have made small business management and firearms manufacturing challenging with a lot of hoops to jump through. Still, marketing the business through Facebook has been cost effective. “... and a source of never ending annoyance on the other,” Reagan said. “Pictures of guns and ammo are scary don’t you see, so Facebook feels it needs to save us all from such horror.” Facebook pains aside, the company also has to deal with supply lines that are soft. “We have to be way, way, way in front of our needs or we’ll run out and be forced to go idle while we wait but we will not let that happen,” Reagan said. “Devin and I are both retired Vets and proud Americans. There is no exercise of the Second Amendment without ample sources of ammunition and access to firearms, equipment and training.” Northern Pend Oreille County, Reagan explained, needs employment opportunities and Pend Oreille Ballistics will provide some. Ultimately service to the community is the motivation factor to these two veterans and they see it more as a duty as opposed to a job.